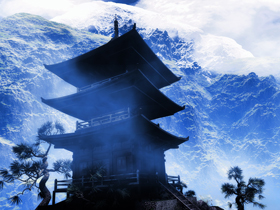 Originally called "T'ung", they represent copper coins. The 1 Circle is known as "the Moon of China".

In China bamboo has always been held in high steem, being a plant of versatility. The 1 Bamboo is usually represented by a sparrow or rice-bird.

Also known "cracks", the ideograms above are the the equivalent of Chinese numbers from 1 to 9. The ideogram below is the Chinese word "won", which means 10,000.

These were originally known as the "Eight Guardians". The four Seasons are: Spring, Summer, Autumn and Winter and the four Flowers plum blossoms, orchid, chrysanthemum and bamboo.